There’s been a lot of development in Grand Rapids lately. Some of those can be attributed to brownfield redevelopment – a financially-based incentive which can help turn contaminated or neglected buildings into new residential and business sites across the city.  WGVU News Intern Kayla Tucker explores the process.

These include a 12-story building at 20 East Fulton, additional construction at Founder’s Brewery - and the development of the New Holland Brewery on Bridge Street.

But what is a brownfield? Susan Wenzlick of the Michigan Department of Environmental Quality defines them.

Wenzlick says the Downtown Market in Grand Rapids is a prime example of a brownfield in action.

Old manufacturing facilities used to reside on the property, along with underground storage tanks that left gasoline and fill material. About 52,000 tons of contaminated soil was taken from the property to the landfill.

"In terms of the way a community looks and feels, you don’t want to have a bunch of falling down, old, burned out, vacant buildings in your community," Wenzlick says. "You’d rather have them redeveloped and vibrant and creating jobs and bringing in tax dollars and not being a threat to public health and safety."

According to Klooster, $1.2 billion in brownfield projects have been completed in Grand Rapids since 1998. The DEQ offers developer incentives for these properties, as they cost more to redevelop.

These can be seen in grants and the use of tax increment financing - where the difference in property taxes before and after development is reimbursed to developers.

This money is intended to cover the cost of public infrastructure improvements. Activities include demolition, environmental cleanup and site preparation.

At the Downtown Market, the incentives included a $1 million brownfield grant from the DEQ to help remove contamination from the property.

Wenzlick says the surrounding area has seen increased development and vibrancy since it opened in 2013. 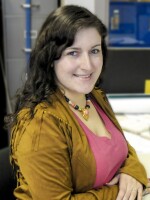 Kayla Tucker
Kayla Tucker is a radio news intern at WGVU. She is a student at Grand Rapids Community College, where she is the Editor-in-Chief of The Collegiate newspaper.
See stories by Kayla Tucker
Related Content